Previous Next
NOTICE: Requires the base game Masters of the World - Geo-Political Simulator 3 in order to play.

With the Masters of the World modding tool, create your own geopolitical scenarios and share them with other players !

IMPORTANT : This upgrade only runs for owners of a valid and activated activation code of Masters of the World.

The modding tool add-on lets players create and play contexts and scenarios (mods), as well as share them with other users. Since its release, more than 60 mods have already been shared and downloaded using the tool.


KEY FEATURES The modding add-on lets you :
New features (compared to the Rulers of Nations modding tool)
Some examples: 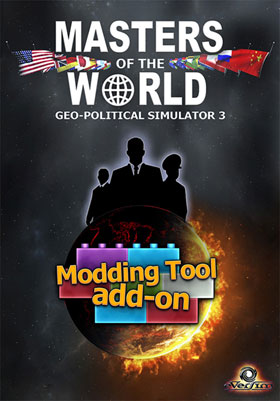