NOTICE: Requires the base game Power & Revolution in order to play. This version is not compatible with Steam.

Simulation of the Covid-19 Pandemic...

Based on actual data, the pandemic is recreated and the player can follow its progress with various graphs, stats and maps and is kept up to date directly by their Health Director. Numerous tools and legislation are at your disposal to try and slow the spread of the virus: managing inventory and distribution policies (masks for professionals and the general public, screening tests, treatments, ICU beds), construction of temporary hospitals, an arsenal of lockdown measures (for the population, for schools, businesses, bars and restaurants), limiting gatherings and travel, regulating transportation, closing the borders, use of tracking software, transfer of patients and vaccine research.

All of these measures can be customized by region and their level of contamination, the objective being to stem the pandemic as quickly as possible and to slow its progress to limit the impact on the economy.

...and the Economic Crisis

Depending on the situation, the player can impose, or lift, restrictions on businesses. In response to the decline in business, various measures can be put into place: partial unemployment, aid for the poor or support for struggling economic sectors to minimize unemployment and the decline in growth.

The debt and deficit of a country can be strongly affected by this crisis and if, in the short term, the State can rely on international lenders, especially when a member of the European Union, then the player will have to return to more acceptable levels in the long term so as not to alarm financial markets.

Other Scenarios
In "The World Without Covid", the player can lead their country in a "normal" context, without the pandemic. In the "SARS-CoV-3 Mutation" scenario, set in 2022, when, after a widespread vaccination of the world population for Covid-19, researchers discover a new patient carrying a virus that seems to resistant to the vaccine. Has the virus mutated? The pandemic crisis plunges the world into turmoil: in the "Coronation" scenario, the player can take advantage of the chaos to install a royalty and become an absolute monarch.
Wargames Scenarios and Functions

A number of units and functions have been added: anti-missile and anti-aircraft batteries which can be deployed to concealed locations to intercept aerial attacks, intercontinental missile silos and anti-aircraft silos that are difficult to destroy and can launch missiles at a very long distance, formation of squads which allows the movement of units as a whole to be able to attack as one or to defend each other, area bombing from cruisers that targets multiple enemy units in a single run, forming groups of satellites or drones to cover a larger area, the addition of anti-missile armaments for carriers and certain cruisers, the addition of a "Fog of War" mode, concealing stationary missile launchers and reinforcing the defense of military bases. A special mini-guide describes the function of all military units in detail.

Numerous lightning war scenarios reflecting the geopolitical context of potential conflicts in which large nations claim foreign territory. The player can choose to play as the aggressor, attempting to annex enemy territory within a certain amount of time; as the defender, fighting back while the international community mobilizes and forces the invaders to retreat (China vs. Taiwan, Russia vs. Georgia, Turkey vs. Libya...)

2020 US Elections
Choose your Republican or Democratic candidate and launch your campaign to become the next president of the United States.
Other new contents
Data updated to 01/01/2020 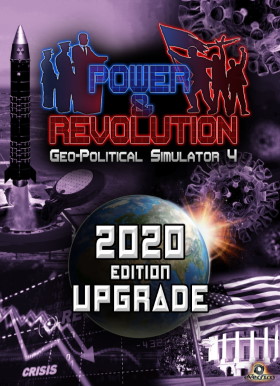