NOTICE: Requires the base game OMSI 2 in order to play. Activation key must be used on a valid Steam account. Requires internet connection.

Especially in Eastern Europe, the low floor buses from the “Urbino” series still shape the townscape of many cities even two decades after their first introduction – but you can also find them in Germany and the German-speaking countries in scheduled service. Now players can experience this series of low floor city buses on the PC. The add-on “Urbino Citybus Series” for OMSI 2 includes two 18 m articulated buses, two 12 m solo buses, and one 15 m three-axle solo bus.

Thanks to their modular development, all five buses are individually customisable. Many configuration options enable players to create exactly the vehicles they want.

Additionally, the vehicles can be fully repainted, so they can be seamlessly integrated into your own bus company.

All models have realistic textures, sound, and animations – especially noteworthy is the bellow of the articulated bus that behaves very realistically in turns. The player can take place in two different cockpit variants offering both German and Polish equipment and setups. 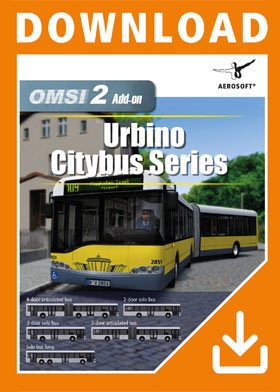