Previous Next
NOTICE: Requires the base game Masters of the World - Geo-Political Simulator 3in order to play.


ABOUT THE GAME With the Geopolitical Simulator 2014 Edition add-on, take the plunge into indepth simulation with this new data set for January 1st, 2014. Plus, thanks to the integrated God'n Spy game mode, you can play the sorcerer's apprentice by changing key values or by creating events at any moment!


God'n Spy Game Mode
At any moment, by using this game mode, you can access internal hidden game engine variables, you can modify some of these variables and create and delete events. 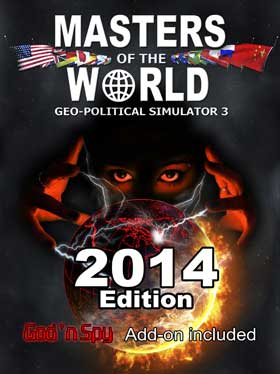