ABOUT THE GAME A-Train 9 isn't just a train simulator: it's an intricate city simulation game with an emphasis on the railway system. Your company is primarily a railway enterprise, but you'll also need to construct buildings, roads, factories, and many other subsidiaries to attract customers for your railways. You'll be building your fortune not just through your railway, but through your subsidiaries. Everything is interconnected: your subsidiaries will affect your railway, and vice versa. A-Train 9 V4 Japan Rail Simulator is the latest and greatest version of the game. Having all the benefits of all previous versions and these great new features added here. Whether you are new to the game, or a returning player, there has never been a better time to ride the A-Train.

A-Train has long been the game of choice for simulation gamers. Bringing together elements of city building and transport planning, A-Train offers a level of scope and scale that matches the imagination of veteran simulation gamers while remaining an accessible game for newcomers. With A-Train 9 V4 Japan Rail Simulation, Artdink have introduced new, exciting elements to bring the virtual world to life like never before.

Here are some of the key factors involved in your success:

Time & Nature
The flow of passengers will fluctuate throughout the day, and operating trains during dead periods will be disastrous for your business. A-Train 9 offers extensive control over schedules, allowing you to fine-tune each of your train routes. You must also take into account terrain and weather when it comes to growth and planning.

Financial Management
Your balance sheet must not be in the red if you want to earn a profit. You'll need to keep track if your financial reports and use the banks and stock market to your advantage if you wish to succeed! Taxes will also come into play each year. Use savvy business and financial tactics to gain an advantage!

Railway Costs
Time and nature affect the railway as mentioned above, but so do other elements. Tracks and trains are expensive to build and maintain, so you'll never want excess if your goal is to make a fortune. Some stations are versatile but expensive, and others are limited in their use but cheap to maintain. Each of the 10+ trains has a distinct advantage and disadvantage, so weigh your options wisely before you spend a small fortune on new trains!

Materials
You'll need a great flow of materials, as they are required to build subsidiaries and grow your empire. Be sure your freight trains and trucks are running at peak performance, and take advantage of in-game tools to optimize your management of materials!

Subsidiaries
Each subsidiary you control (apartments, stores, restaurants, parks, etc.) has the potential to grow the city, your railway company, and your wallet. But it's a delicate balancing act! Build too many and you'll have empty buildings and huge maintenance bills. Build too few and nobody will flock to your city, leaving your trains without passengers. Other companies will move in if your area is attractive enough; they may compete with you on a real estate level, but the people they bring will still have to use your trains!

Customize And Create With More Freedom Than Ever
Hundreds of new assets have been added to A-Train 9 Japan Rail Simulator. Create your own city down to the finest detail with many more elements allowed on each map. Whether you want to design a real life city down to the fine detail, or create straight from your imagination. From the massive scope of a metropolis to the fine detail of roadside assets, signs and signals. You can do it all with A-Train.


KEY FEATURES Growth through Transportation.
It was Wellington who once observed "an army fights on its stomach". His meaning was that logistics are everything. Supply lines, transportation and preparation. In business every manufacturer in the world requires a smooth and efficient method of buying raw materials and delivering finished goods. Furthermore, a work force needs to get to their place of work. At the beginning of the typical game of A-Train Railway Simulator, little or none of this infrastruture is in place. It is your job to provide that network. Use the resources and funds given to you to make a city or district "work" efficiently. Get goods to where they are needed and people to and from their work and leisure activities.

New Feature: Size and Scope Doubled
The scope of the game has been hugely increased;
New Feature: Size and Scope Doubled
The number of buildings has increased making it possible to create even more realistic real-life cities – or design your own utopia cities with much more detail. Track side assets have been hugely increased in number. From signage, barriers and lighting, right down to litter bins and bollards. Your cities can come to life with detail like never before.

Road and Rail
Rail track laying, and to a lesser extent road building is your primary route to success. Connecting people with their work place and goods with areas that require expansion and growth. How does that work? Well, to begin with let's take a look at your city. Ok, we have residential areas, business areas, factories and depots in this scenario. However, a quick look at the map shows only road links (the slowest end least effective form of transport) in place. We need to link these areas up and provide a decent network. Laying track costs money, while you can lay straight over buildings and trees, that will increase the cost of the track laying substantially. Likewise, by using the "Geo" menu option is it possible to flatten or raise land - but even small changes in the topography can cost millions. Keep an eye on your cash at and, and check your cash reports from time to time.

Station to Station
Stations, be they road, rail or cargo (depots) need space. A-Train Railway Simulator allows you a huge amount of choice in the stations you build. Rail stations can have up to 6 tracks, and can be stacked as often as you like. 2 stations side by side? 12 tracks - and if you develop your city huge hubs like this might be required. Depots need space, without them there is no materiel for growth. Larger depots will facilitate larger building projects - but in turn take up more space. Here's a simple layout. 2 stations of 2 tracks per station joined. Maybe we'll use one track for passengers, the other for goods?

New Feature: More Layout Options
A-Train has always had a simple to use and flexible rail and road laying system, now that gets even better with the ability to use offset X junctions to your rail network and have roads run smoothly at 45 degrees around new buildings. Create more realistic cities and more flexible rail networks.

Train Time
Now we need to add the trains, and there is choice here (and more choice to come. Degica are committed to adding more trains for download after release) What size train, what speed, and importantly for the latest release, we can decide on the exact consist? We can even set a maximum speed at this point. Handy to save fuel and prevent trains from queuing up at popular stations later in the game.

New Feature: Speed Control
Control the travel times of trains with the new speed restriction controls. Set track side markers that slow down your trains or allow them to travel at their full speed. Using these new controls it’s now possible to ensure that your schedule runs smoothly. It’s easier, for instance, to prevent long waiting times at platforms and to have your trains arrive and depart at most profitable times of the day without the need to have them waiting or blocking the tracks for other vehicles.

Scheduling
Ok, with one train on one track scheduling is pretty simple. Here is the scheduling interface. Almost every object in the game has an interface. Every junction can be set, every train can be scheduled. Every platform can have specific rules for arrivals and departures. Leave straight away? Wait for a specific time? Wait until full? Don’t want to run certain commuter trains at weekends? It's all catered for and the interface is consistent for every object you can manipulate in the game. Learn to schedule a train and you can use the same skills for road vehicles - and yes the road traffic lights also work and can have priorities set.

New Feature: Train Groups
Having up to 200 vehicles in your transport network can be a real headache. Now it’s possible to sort and group your vehicles. Give each group a colour to denote the type of vehicle, route or whatever other criteria suits your management style. This new system makes it easy to see at a glance what is going on in your city.

Investing
You start each game of A-Train Railway Simulator with a set budget. I can tell you now, you are going to need a lot more money. While running your transport business is one way to do it, another is to invest your money in either property, or stocks and shares.

Stock Up on Shares
There is also the stock market. With dozens of different companies to invest in. The returns here can be quicker than real estate, but the potential for losses is also huge, Remember the warning they use in the TV "Share prices can go down as well as up"

Speculate to Accumulate
Your company can buy any building in the game. Office blocks, factories, offices, depots. You can own and place whatever you can afford. In fact early in the game it might be a good idea to buy some real estate to encourage people to move. Lot's of residential and little business opportunities in your new town? Why not buy factories, offices and shops to stimulate growth? Place them carefully. Use your money wisely, and expect to have to wait several game years for your investments to bear fruit.

Don't Let the Lights Go Out
It's your responsibility to make sure your city is powered up. Here again A-Train Railway Simulator offers several choices. From solar or wind, through fossil fuel burning and nuclear. Each has different advantages and drawbacks.

New Feature: Direct Control of Trains
Ever wanted to actually drive a train around your city? Now you can! Jump into the driver’s seat and take the throttle of your trains. Keep to the speed limits, deliver the passengers or cargo. See your city from a whole new perspective. It’s also possible to climb into cars and boats. This great new feature adds a new dimension to A-Train 9 V4 Japan Rail Simulator. 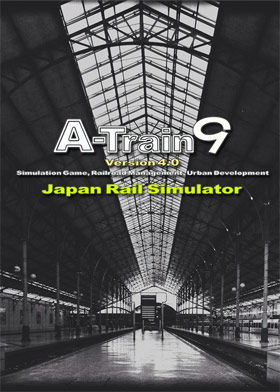