Previous Next
The political crisis has been going on for months, leading to worldwide turmoil. A secret conference of the UN Central Geological Commission reveals that worldwide oil reserves have reached dangerously low levels: Oil reserves will run out within 8-10 years.

This proves too short for even the most highly industrialized countries to switch their economies to alternative energy sources. Soon, mass protests erupt all over the world, effectively shutting down the global economy. The Great Powers have declared WW III...

World War 3 - Black Gold is a fully 3D RTS game with all the features that characterize this genre. The game has been developed based on a 3D environment, so that the player can set the camera anywhere and freely zoom in and out. All game objects are 3D, as well as the terrain itself. The units also possess unique, dynamic physical properties.

For example, vehicles move faster on hard soil than they would in sand. There are three parties in the game: the USA, Russia and Iraq. Each faction allows the player to select two campaigns, consisting of 5 missions on average. Each campaign begins and ends with a rendered film scene. 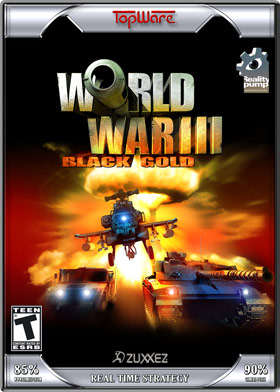