Previous Next
ABOUT THE GAME
Money rules the world, a truism even a child knows. Is it really so surprising then, that money now rules outer space as well? The truth is, the laws of business have taken over the universe, with one obvious exception; robots! Money is useless to these robots and they honestly could care less about the trifles that come along with earning it. But before you decide to praise them on their morality, this doesn’t mean that those rust buckets aren’t out for their own brand of currency – energy. Their motivation to get sweet, sparkling energy makes them no less dangerous then the human space conquistadors.

What’s that? “What about the aliens?” you ask? Well… who knows what they think? What I do know, is that they are just as greedy as anyone, and will stop at nothing to obtain entire planets for themselves!

Yep, it’s a hard life as a space adventurer. A whole lot of planet conquering is waiting for you, regardless of whether you are a human or a robot. Now enough jawing. There’s no time to waste! Get out there and rule that galaxy! Those planets won’t conquer themselves.

In addition to the single player campaign, Planets Under Attack offers an explosive Multiplayer mode where “space-wise” tacticians can face off and find out who the real space aces are. Multiple game modes like Elimination, King of the Hill, Domination and Capture will provide hours of variety and entertainment.

Show your success! Unlock titles, avatars and achievements, and boast about them via online leader boards. Find out who the ultimate space fighter is! 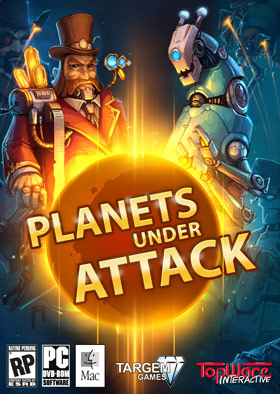