The Content Pack contains a Portrait Pack detailing the east African provinces and a Clothing Pack focusing on the late Byzantine Empire. In addition to these, there are fifteen new models for both Eastern and African councilors.

ABOUT THE GAME Little remains of those settlements where the Black Death has passed through. Hasty burials make a mockery of the sacraments and set a feast for the crows. Once prosperous provinces have been laid waste, and the lord of the land hides away – secluded in his hilltop fortress, hoping the plague will pass him by. Wiser princes took precautions, and didn’t waste the revenues from more prosperous years.

But, in time, all must pay The Reaper’s Due.

The Reaper’s Due expansion for Crusader Kings II highlights the historic importance of epidemics and disease in the Middle Ages, especially the Black Death – an outbreak of the bubonic plague that may have killed a third of the population of Europe.


KEY FEATURES The Reaper’s Due introduces many new systems and features to what is already the richest medieval tapestry in gaming: 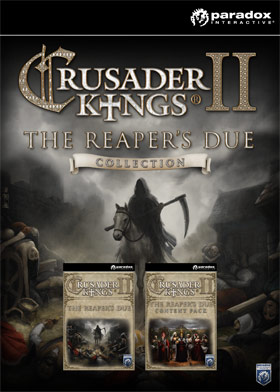