ABOUT THE GAME Take control over seven of the biggest industrial machines in the world. During the 14 mission campaign you will punch through the snows of Greenland, plow the steppes of Wyoming and travel all the way to sunny Florida. Your hard work will be completed by launching a space shuttle to the International Space Station.

Giant Machines 2017 enables you to control seven of the biggest industrial machines ever created on Earth. They will introduce you into the world of hissing hydraulic systems, excavator buckets and the smell of diesel.

Unlike contemporary simulators, the 14 main missions are all part of one story. The goal is to send a space shuttle to the International Space Station. Your tasks will be, among others:


Our machines have the following features:

Your campaign takes place in 6 different geographical localizations: Greenland, Canada, Wyoming, Missouri and Florida. Thanks to a detailed depiction of the machines, you will be able to appreciate the magnitude of those beasts (compared to a human, a car and buildings placed on the map). You can also explore the machine in first person perspective; the wide view from the cockpit will immerse you in the world of really heavy machinery.

An alternate gameplay mode is Time Attack. It is unlocked after you complete the story mode (campaign), and is comprised of selected missions. The rewards for completing a mission in a set time are bronze, silver and gold medals, and your entry into the high scores.

Your hunger for knowledge will be satiated by the Machine Library. This small encyclopedia with 3D models will broaden your knowledge of the biggest machines man has ever built. Technical parameters and performance data included. 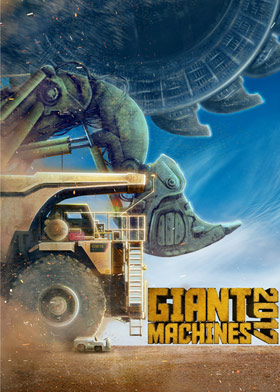