ABOUT THE GAME This bundle pack, containing all DLC previously released for Tomb Raider, enhances Lara’s formative first adventure with all the single-player DLC and ups the ante online with six weapons, four characters and eight maps for the multiplayer game.


KEY FEATURES New challenge tomb:
Explore the final resting place of an intrepid adventurer and solve a puzzle involving a crashed plane in the Tomb of the Lost Adventurer.

Six new outfits:
Suit Lara up in classic 1930s adventurer attire with the “Aviatrix” outfit, give her the grapples and harness of an expert climber with the “Mountaineer” outfit and dress her to kill in the “Guerilla”, “Sure-Shot”, “Demolition” and “Hunter” outfits.

Five new upgrades
Help Lara become the adventurer she was born to be! Scale sheer mountain faces with ease using the “Agility” skill, find animals more easily with “Animal Instinct” and become a more deadly combatant with the “Headshot Reticle” “Pistol Silencer” and “Pistol Burst” upgrades. The skill and weapon upgrades can also be unlocked through gameplay without purchasing this DLC pack. The DLC gives you the option of manually enabling them early.

Six new weapons:
Take out your adversaries with a deadly selection of shotguns, pistols and submachine guns used by Agent 47 in Hitman: Absolution.

Four new multiplayer characters:
Join the battle for Yamatai as the stalwart Fisherman, the crafty Scavenger Bandit, the wily Scavenger Scout and the deadly Scavenger Executioner.

Eight new multiplayer maps:
Fight amongst relics from Yamatai’s turbulent past in the “Dogfight” and “Lost Fleet”, ride ziplines across the “Shanty Town”, avoid the flames in the “Burning Village”, lay traps throughout the “Forest Meadow” and “Cliff Shantytown”, and take the battle to the island’s dark heart in “Scavenger Caverns” and “Himiko’s Cradle”.

To activate Tomb Raider, you will need an internet connection and a free Steam account. If you do not already have a Steam account, please read the Steam Subscriber Agreement before buying the game.

To activate Tomb Raider, you will need an internet connection and a free Steam account. If you do not already have a Steam account, please read the Steam Subscriber Agreement before buying the game. 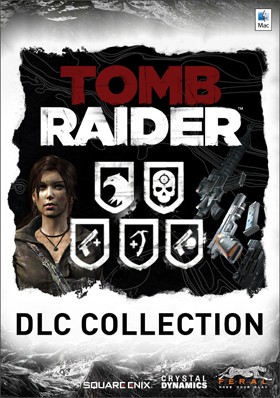